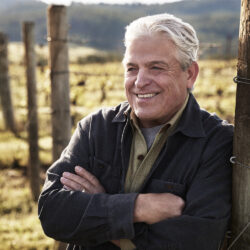 When one’s business is farming, you are by necessity acutely aware of and impacted by every subtle change in the weather. You feel the shifts in wind direction. You notice changes in humidity. With every step on your property you subconsciously sense the tilth of the soil profile below you.

April brought the first significant event. Beginning with the “Ides of April” our temperatures dropped precipitously. From the 13th through the 17th the recorded lows at most of our sites were below freezing. This was far more than a typical frost event. It isn’t uncommon for us to see damage to vines planted in low-lying areas at or just above 200 feet during Spring. This was a cold front from the Pacific that affected vineyards as high as 600 feet in elevation.

The timing of that freeze caused extensive damage. It coincided with the point in time that we have “bud break”, which is the first appearance of green tissue from the dormant buds. Each dormant bud is in fact three buds that coexist within the same bud case. The primary is the first to develop and without damage will generally produce two clusters in a growing season. If the primary is damaged the secondary bud develops. A secondary bud would be expected to develop one smaller than normal cluster during the growing season. If both the primary and secondary are completely destroyed by freeze then there is a third or tertiary bud that will likely produce a somewhat underfed shoot with leaves but generally no clusters.

The cold of mid-April caused losses of primary buds in our sites that varied from 40% to 80%. It was the worst damage our industry has ever seen due to Spring freeze damage. We looked at the experience of other regions that are prone to freeze damage to understand what we could expect in crop level. It wasn’t pretty. If we had a typical year going forward we would likely have 1 to 1.5 tons per acre. At those levels it is virtually impossible to cover your farming expenses…..much less have any profitability. The prospects were grim.

The freeze damage essentially caused a restart of the season. During May we finally began to get development but as a rule, we were 3 weeks late and remained so through the rest of the season.

Each berry begins life as a flower. Our flowers have both male and female parts so we are self-fertilizing. No bees necessary. We are, however, dependent on good weather during flowering to achieve good levels of fertility. Cold and wet weather would result in poor fertility with perhaps 40% to 60% of the flowers becoming berries. Warm temperatures and clear skies would likely bring 65% to 80% fertility. Due to everything happening later in the calendar our period of flowering took place in early July rather than June. The weather was stunningly perfect.

Testing for fertility is done 10 to 14 days following full flower. It’s a simple concept. You simply cup the cluster in one hand and gently brush the cluster with the other. The berries that have fertilized remain on the stem (rachis) while those that did not fall off into your palm. A percentage level of fertility is easily calculated knowing the counts of each.

When we walked and checked our sites, virtually nothing was falling off into our palms. The perfect weather of last July had provided the highest level of fertility that I have seen in my 45 vintages. Probably 90% to 95%. So…though we had fewer clusters the clusters we had were twice the weight typical of Pinot noir.

That was Miracle Number One.

Miracle Number One gave us hope that we could still succeed in the 2022 vintage. But we continued to be weeks behind and the expected rain events and cooling of mid-October were looming. We would need an amazing fall to pull this rabbit out of the hat.

September was dry as dust and exceptionally warm. We had a total of less than 1/2 inch of rain for the month. 17 of Septembers’ 30 days had temperatures well above the normal range for our region. Then the vines were clearly accelerating ripeness now and the 3 week delay we had been seeing during the season was shrinking quickly. Now onto October and we are knocking on wood.

October blew our minds. We had zero rain until October 21st and by then we were in the barn and out of harm’s way. Of those first 20 days of October fully 18 days were above the normal range of high temperatures. Nine of those days were in the 80’s! To say we finished with a flourish doesn’t begin to describe how fantastic October was for us.

That was Miracle Number Two.

We are close to our grape-growing brethren all over the world and none can recall such an incredible recovery as we saw this year in the northern Willamette Valley. It defied all prior recorded experience. When you are working hand in hand with Mother Nature the lessons just keep coming.

We are very excited to show the results of this dramatic vintage to you at our upcoming Open House. The detail, complexity and balance of the vintage are classic World Class Willamette Valley Pinot noir. Please join us on November 19 or 20 from 10am- 4pm, at the winery, you can RSVP by visiting our website.

Just checking in with everyone to let you know that our families and our teams are safe both regarding COVID-19 and the fires in Oregon. We are extremely grateful to have been spared from fires and smoke damage. Our hearts go out to so many in the west coast wine communities that are still battling.

Our team is not unfamiliar with battling fires and emergencies across Oregon. Ken has been serving as the board treasurer for the new Carlton Fire District for 15 years. Mark Gould, our lead vineyard manager, has been serving as a Carlton volunteer fire fighter for years. In fact, Aaron, our Winery Ambassador Ivory’s husband, is still in Southern Oregon near the California border battling the Slater fire. Our thoughts are with the firefighters and first responders who continue to serve and protect.

The recent fires have spurred industry concern over smoke taint. With rumors swirling in the Willamette Valley, literally like smoke, it is very important to get the facts out. Smoke taint occurs in grapes when a vineyard is in near proximity to a fire or directly downwind from an active fire. The volatiles that create issues are ephemeral, over a fairly short period of time they break down. Which is why we are not concerned about “old smoke”.

It is a common occurrence in Oregon in the fall for there to be an east wind.  Which is the opposite of the onshore flow that we normally experience throughout the year. When there are fires in the dry high desert of eastern Oregon, those east winds can bring smoke to the Willamette Valley. We have experienced this numerous times before. In a number of years, we have had smoke cover in the Valley for as long as 10 days. In none of these occasions have we had a wine that had an issue with smoke taint. We credit the lack of affectation to the fact that this is “old smoke” from quite a distance away.

As of today, we have tasted all of the fruit from every site that we farm or source from in the valley, 13 in total. We have yet to see affectation to this point of any kind. It is true that we have had a couple of regional fires, one near Hagg Lake in Washington County and one on the north side of the Chehalem Mountains. These fires were contained very quickly. A vineyard neighboring these fires would have a realistic cause for concern. Vineyards that are miles away should not be concerned.

Over the last week, emotions seem to be driving decisions more than science regarding smoke taint with some of our industry members. They are reacting in fear instead of with critical judgement. Perhaps with the combination of the pandemic and the smoke, it is causing knee-jerk reactions. Scientific testing of smoke taint in a laboratory looks for free guaiacols (smoke markers). There are no laboratory tests that have been done that show we have an issue regionally.

Critics agree that 2017 produced a lush and remarkable vintage from the Willamette Valley. In that year, we experienced 10 straight days of smoke from the eastern and northern fires, much longer than we have experienced this year.

Do not be faint of heart, we are going to make great wine this year. 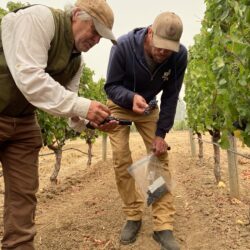 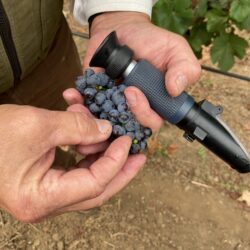 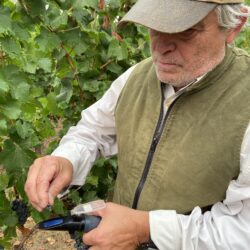 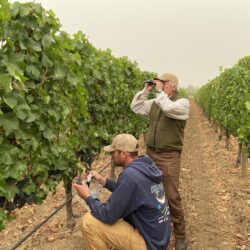