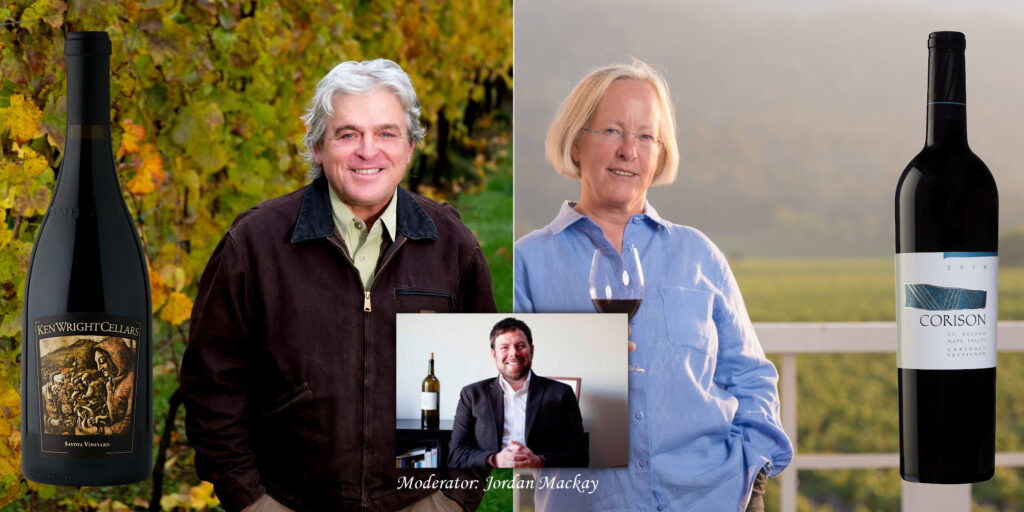 Join Ken Wright and Cathy Corison, of Corison Winery, for a conversation about their 40+ years of winemaking experience, fun stories about the start to their careers, and insight about their respective wine regions. This conversation between Ken and Cathy is moderated by James-Beard-award-winning writer, Jordan Mackay, a specialist in wine, spirits, and food. Jordan’s work has appeared in Food & Wine, The New York Times, San Francisco Chronicle, Wine and Spirits and many others.

With Ken’s 44th vintage under his belt, we think it’s pretty awesome to still be considered a trendsetter in our industry. The environment at Ken Wright Cellars really is one of constant research, innovation and drive to do better at our craft.

Cathy Corison, owner and winemaker of Corison winery, and a fellow University of California alumna, has carved her own self-made path in California. Her secrets to success— beyond winemaking skill— are focus and integrity. Since her first inclinations toward wine as an undergraduate in college, she’s taken her own road, and now countless others are following the trail she blazed.

A special thank you to the team at Corison Winery and to Jordan Mackay for this fun collaboration!

To shop the wine Ken is tasting in the video, our 2019 Savoya Vineyard Pinot Noir, click here!

A Conversation With Ken Wright & a Look at His 2019 Pinots »